Vintage Watch of the Month: The Railmaster 1957! 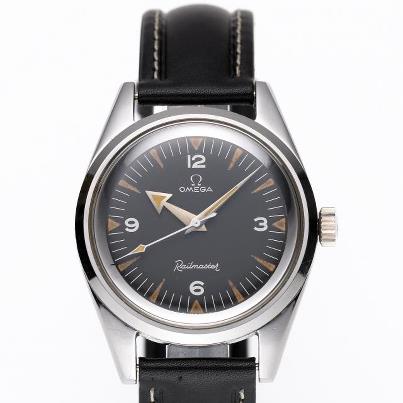 In 1957 OMEGA launched the famous Railmaster. Its movement was encased by a mu-metal cage that protected it to magnetic fields of up to 900 gauss. Problems due to strong magnetic fields encountered in locomotives, laboratories, power plants and hospitals were solved. Modern watches that are designated “anti-magnetic”, are rated to 60-80 Gauss and are therefore only resistant to slightly-above-normal magnetic fields. The 1957 Railmaster demonstrates OMEGA’s long-standing interest in developing watch movements that are resistant to magnetism.The same spirit behind the production of the Railmaster more than half a century ago has led to the creation of the OMEGA Co-Axial caliber 8508, which will be launched in autumn of 2013. This technological marvel is magnetic resistant to more than 15,000 gauss (1.5 tesla). Unlike other watch movements designed to resist magnetism, the OMEGA Co-Axial caliber is not protected by an inner case.

One of a kind

The movement itself is anti-magnetic through an innovative use of selected non-ferrous materials. In a time when magnets are increasingly present in our lives, OMEGA is showing the world how a mechanical watch can resist the influence of any magnetic field anyone is ever likely to encounter. This worthy successor to the extraordinary 1957 OMEGA Railmaster was introduced at a press conference in Geneva on the 17th of January. If you want to know more about the story of the brand then visit the Omega Museum

Are you into vintage omega watches?

Then take a closer look at our