On January 23, 1960 two men achieved one of the greatest feats of the 20th Century diving to the deepest part of the world also known as the The Mariana Trench situated 35.800 feet below the surface and around 200 miles southwest of the island of Guam. 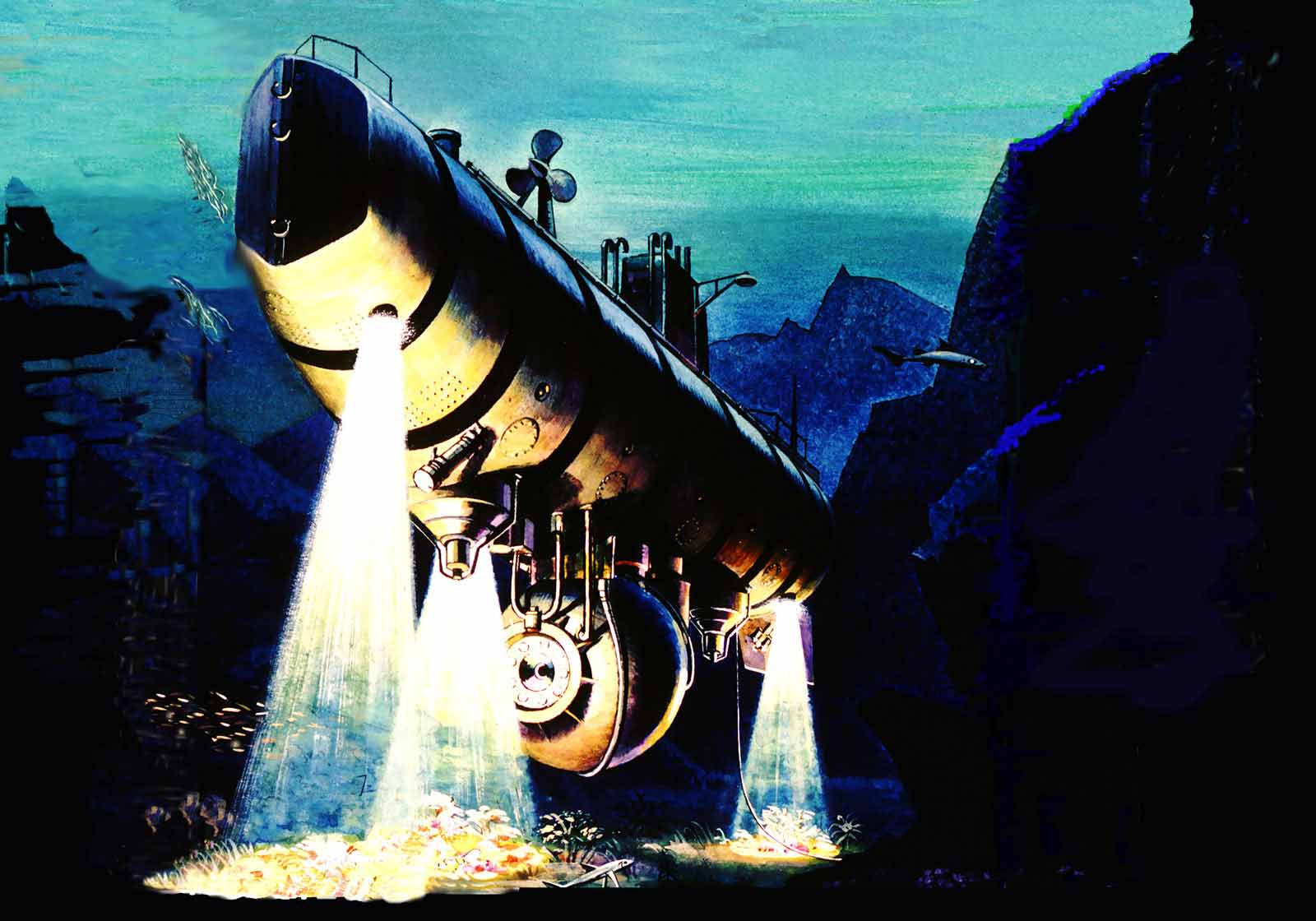 The journey was to become a legend feat and was achieved in a most unusual and innovative submersible named The Bathyscaph Trieste engineered by the Swiss genius Auguste Piccard. The submersible was designed and engineered in Switzerland, built & launched in Trieste, Italy where the U.S. Navy had it updated with a new gondola, which was built in Germany by Krupps. 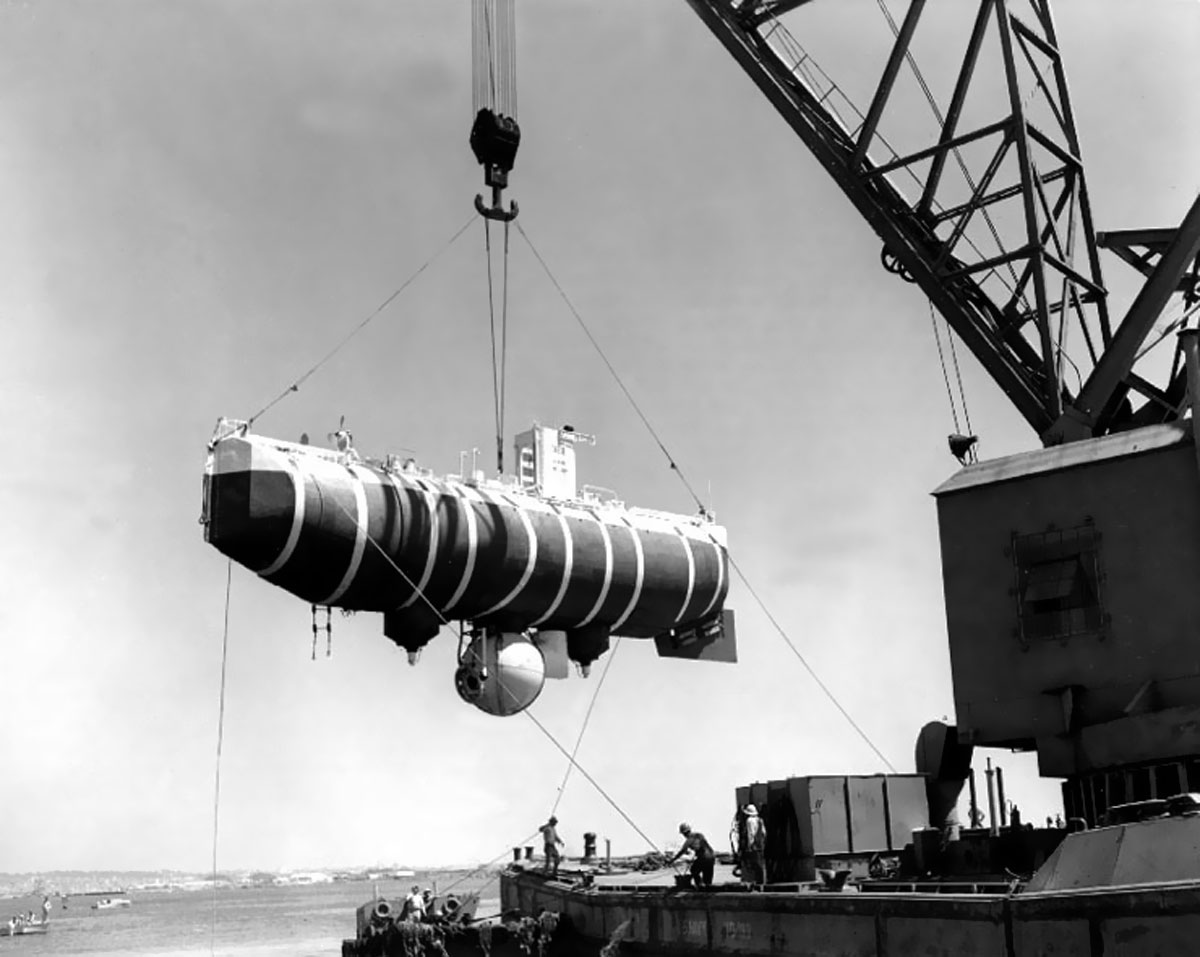 Submersible pilots on board the vessel

In lead of the expedition, which was to become know as the DeepSea Challenge, was the US Navy officer and Submersible Pilot – Don Walsh, whom already at that time was know as a far from very day kind of guy as he in an early age held several of deep dive records and later in life came; to dive the RMS Titanic, the German Battle ship Bismarck, to be one of the first to explore the hydrothermal vents of the floor of the Atlantic Ocean, travel on board the Russian nuclear-powered icebreaker to the North pole and to do ice diving on Antarctica. In other words – the captain of the vessel was Don Walsh whom at all times have been U.S. Navy’s Submersible pilot #1 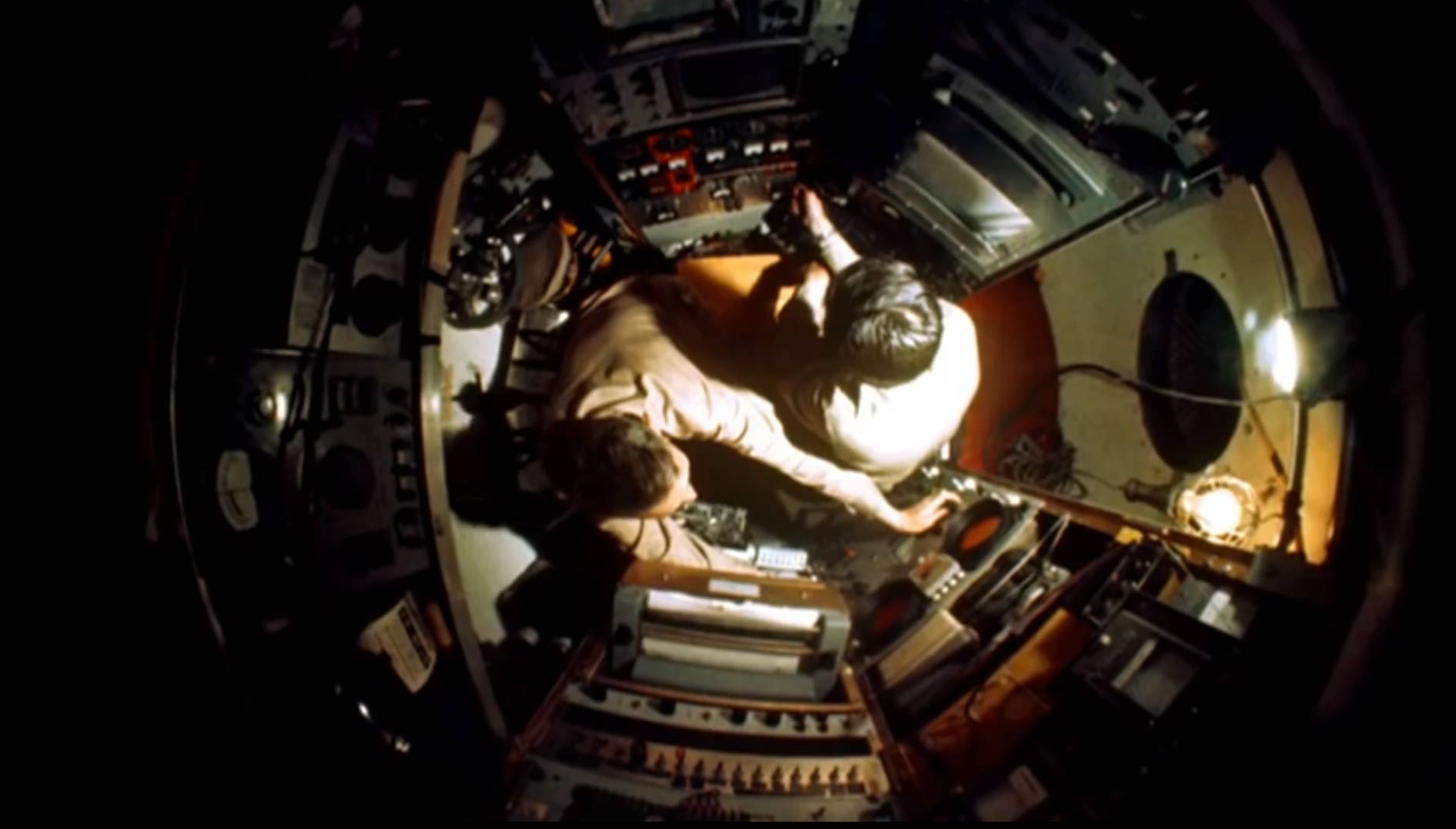 Along side with Don Walsh was the Swiss inventor Jacques Piccard, whose dad was the actual creator of the The Bathyscaph Trieste – Auguste Piccard. Even though the two guys was far from alike when the training for the dive began in early 1958 they soon was to became even as the submersible began is submerge on the early morning of 23th January 1960. 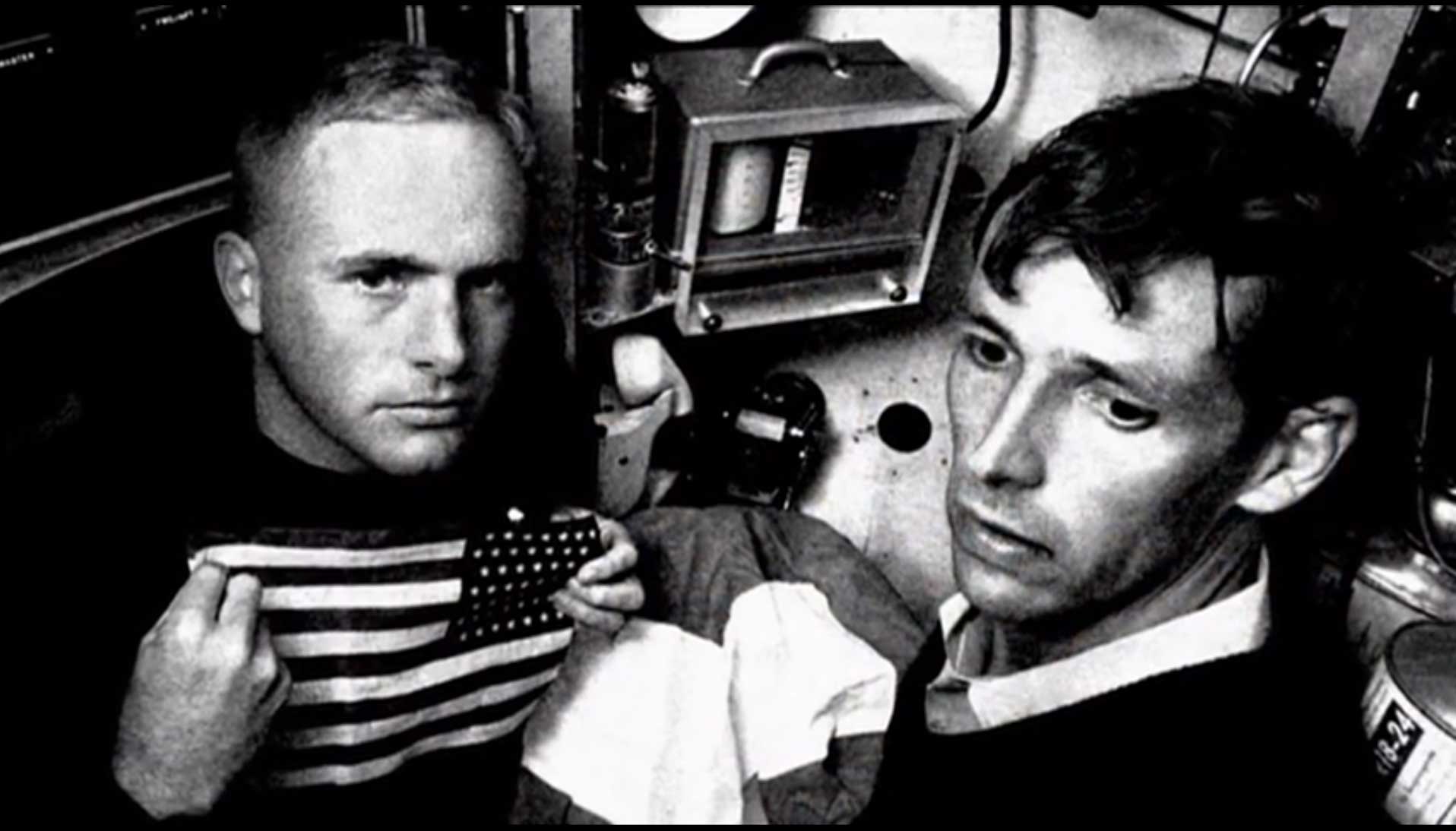 The Success of the Deepsea Challenge is in any way to be compared with “One Giant Leap For Mankind” by Neil Armstrong when setting foot on the moon on July 20, 1969 not to forget the first summit of Mount Everest by Edmund Hillary and Tenzing Norgay on May 29, 1953. Completing the circle of extreme human achievements’ when conquering air, land and sea. 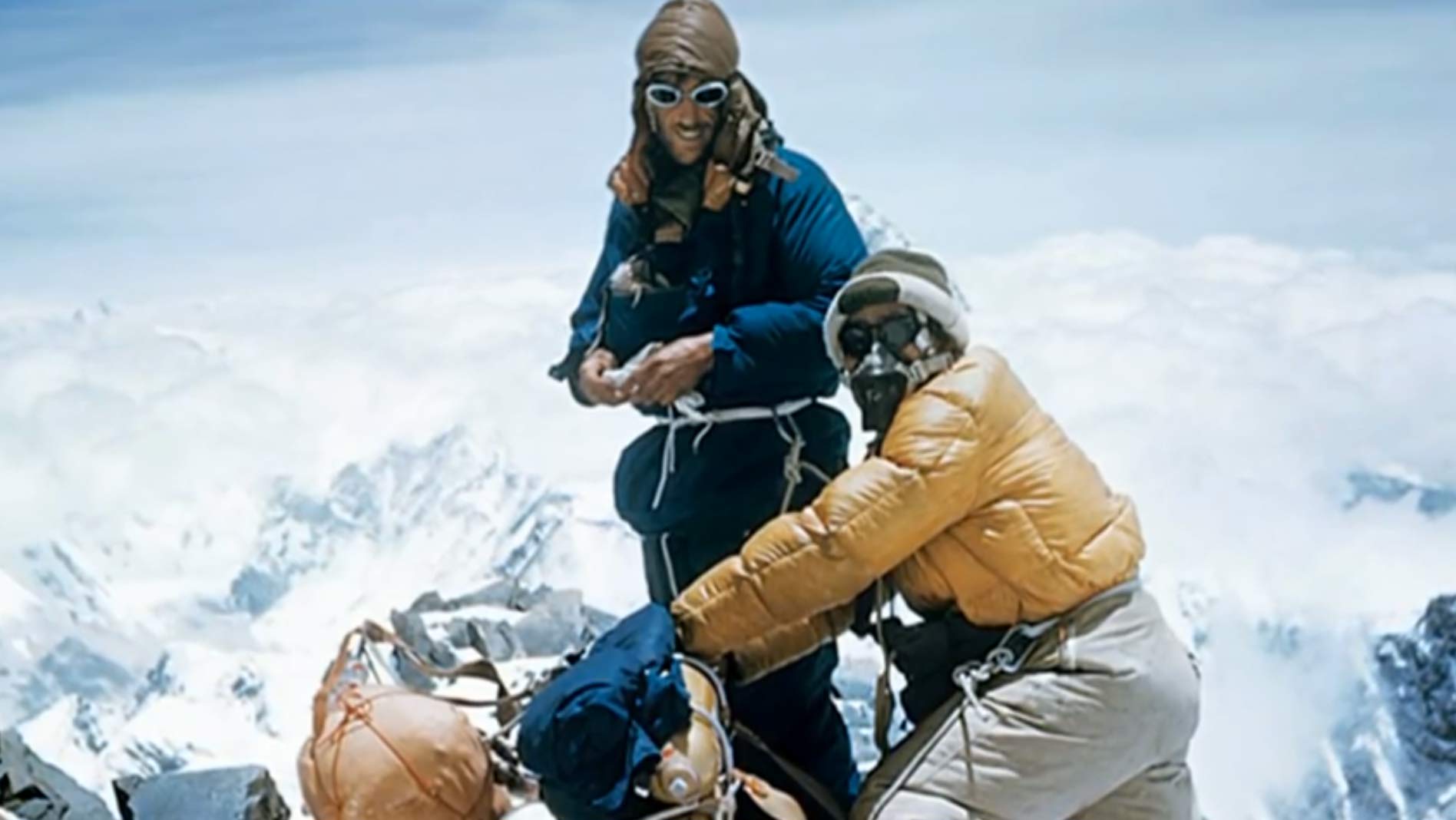 Don Walsh’s watch on the trip to the Mariana Trech

Since 1960 a lot of people has been guessing wildly regarding what watch Don Walsh had attached to his wrist during the deepest dive in the world taking him from the surface to the depts and back again. But until lately only few people have know what he worn during his trip to the bottom of the Mariana Trench. A lot of guessing has been around a Rolex 6542 but a fact is that the Rolex GMT Master was a watch presented to Don Walsh by Rolex after the success of the DeepSea Challenge on 23 January, 1960 where Don Walsh became one of Rolex ambassadors. 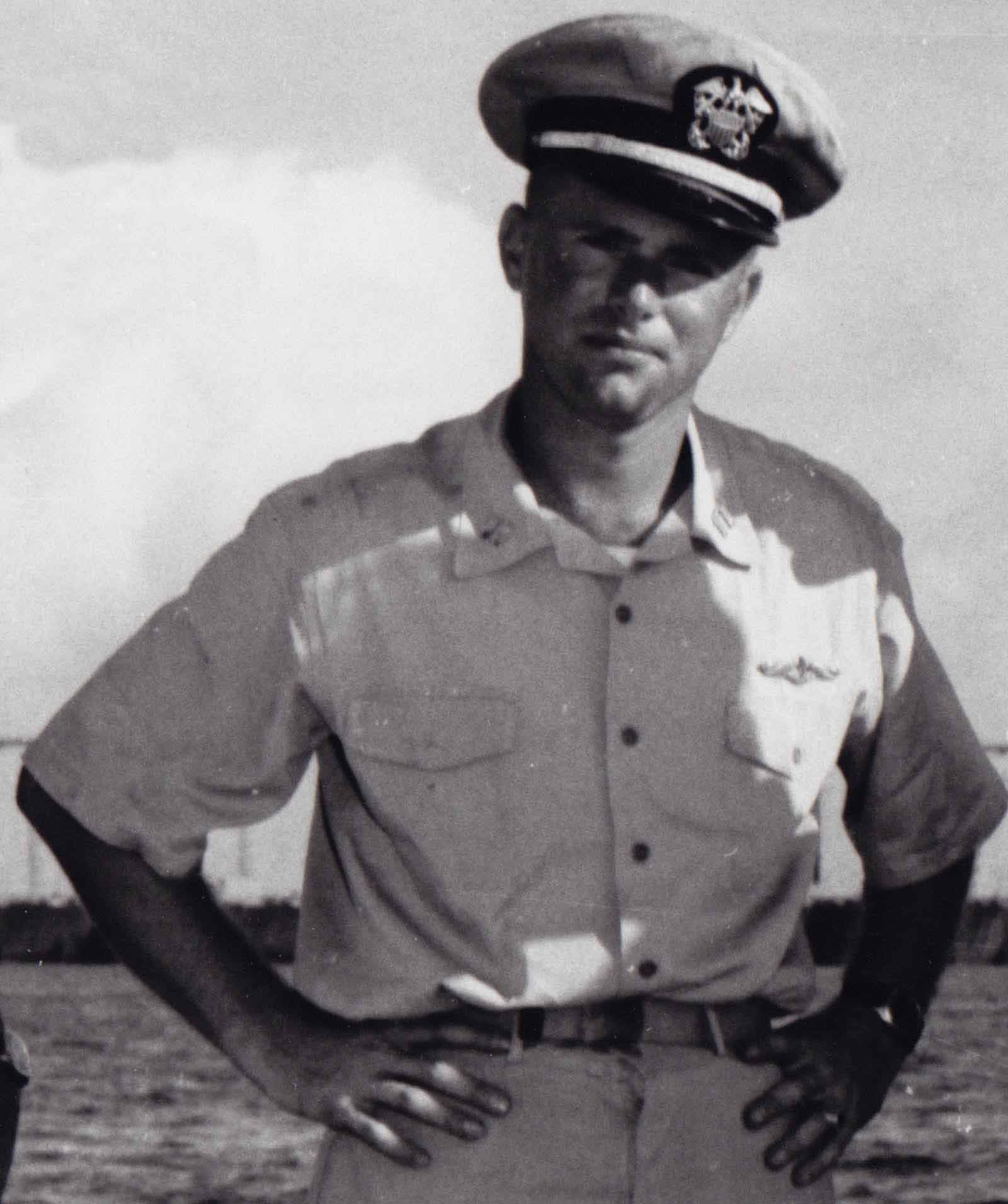 Prior to and on the 23 of January 1960 Don Walsh watch of choice was a JeanRichard Geneve AquaStar – a watch only few know and a watch only a few people can ever have as the brand and model only existed for a few years. 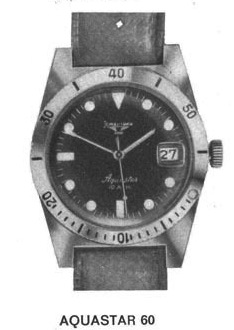 This prime reason Rolex made Don Walsh a Rolex Ambassador is to be found in the fact that the The Bathyscaph Trieste didn’t sole bring Don Walsh, Jacques Piccard and JeanRichard Geneve AquaStar 60 to the bottom of the world. But also an experimental Rolex Deep Sea Special wristwatch, which was attached to the exterior of the Trieste. The Rolex Deep Sea Special was a special constructed prototype that never came in production nevertheless the watch formed the basis for the later creation of the Rolex Seadweller. If the Rolex Deep Sea Special should happened to leak during the decent to the bottom of the Mariana Trench Don Walsh would never have become one of Rolex’s ambassadors. A fact as the success of the DeepSea Challenge to Rolex was that the Rolex Deep Sea Special could resist the pressure during the dive, was still ticking and kept time as the vessel surfaced. A success criterion that seems to explain why Don Walsh wasn’t presented with a Rolex GMT Master reference 6542 until the possible achievements of the dive was a reality. 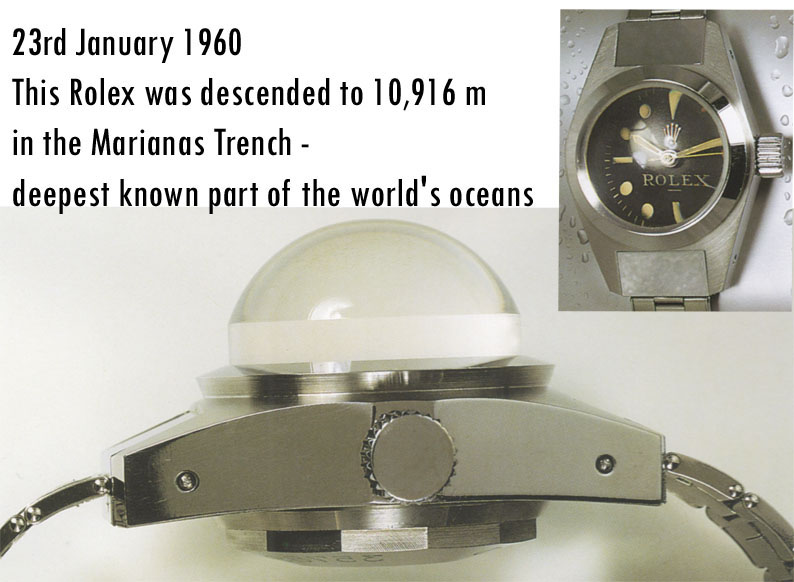 The legacy of Frédéric Robert

Frederic Robert became Omegas’ chief Designer and was of coruse a diver him self. If you are in to JeanRichard Geneve watches and designs you will be able to spot the design an details linking the Aquastar with the Omega Seamaster 120, The benthos 500 & Triton with the Omega 300 etc.

In early 1958 when still in process with designing the JeanRichard Geneve AquaStar 60, Frédéric Robert had applied for patent on a bidiagonal bezel for the construction of the AquaStar 60 a features with wasn’t standard at the time. Futhermore Frédéric Robert was the genius that simplified lollipop second hand design, which served the purpose of making is easier for a diver to follow the seconds and minutes when in deep dark waters. 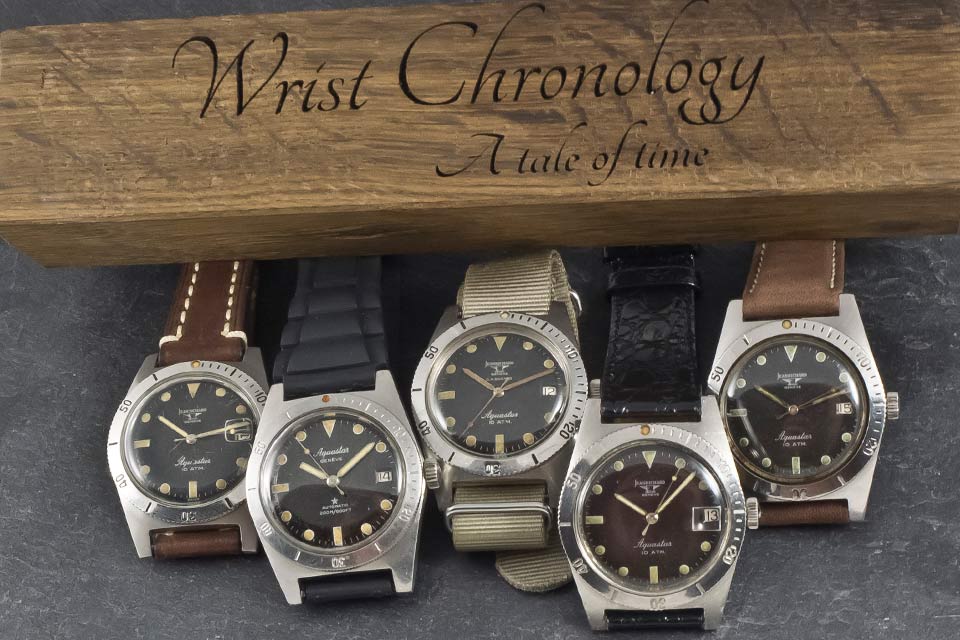 Another invention attributed to Mr. Frédéric Robert was the brilliant design of the AquaStar 60’s dial. The design have made a massive footprint in watch design history and has a self fulfilling prophecy had an enormous impact on all watch designers whom ever since have had a hard time trying to fill in Frédéric Robert shoes. The design of the JeanRichard Geneve AquaStar dial has been one of Frédéric Roberts’ biggest legacies and has been a heavy influence in for example some of most popular Rolex models till this day. 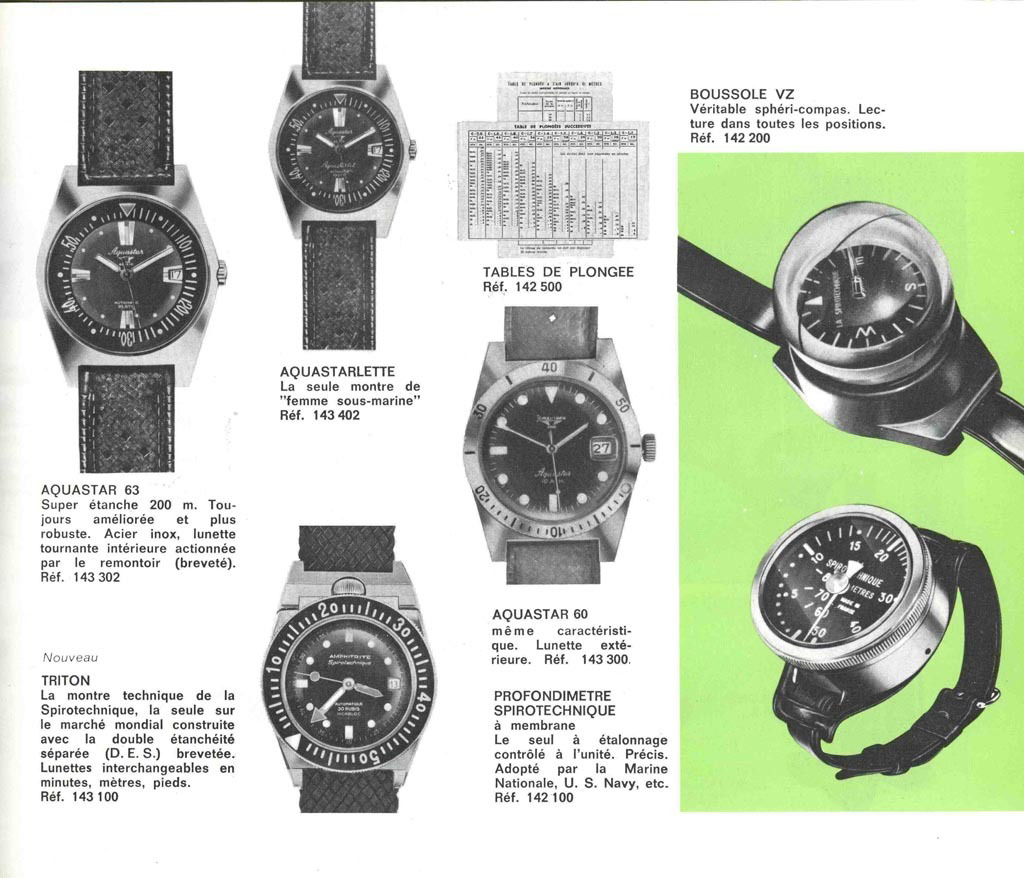 When hunting a Don Walsh watch

The JeanRicahrd Geneve Aquastar 60 watches produced from 1958 untill 1962 had “JeanRichard Geneve” written on top of the dial and “AquaStar” written below the center. But as AquaStar Geneve SA in 1962 took over the brand “AquaStar” became brand name and found written on top of the dial on the place of the brands name “JeanRichard Geneve”. The AquaStar 60 continued as a model. But be aware as the watch prior to 1962 and thereafter is very similar to each other but far from alike to connoisseurs. 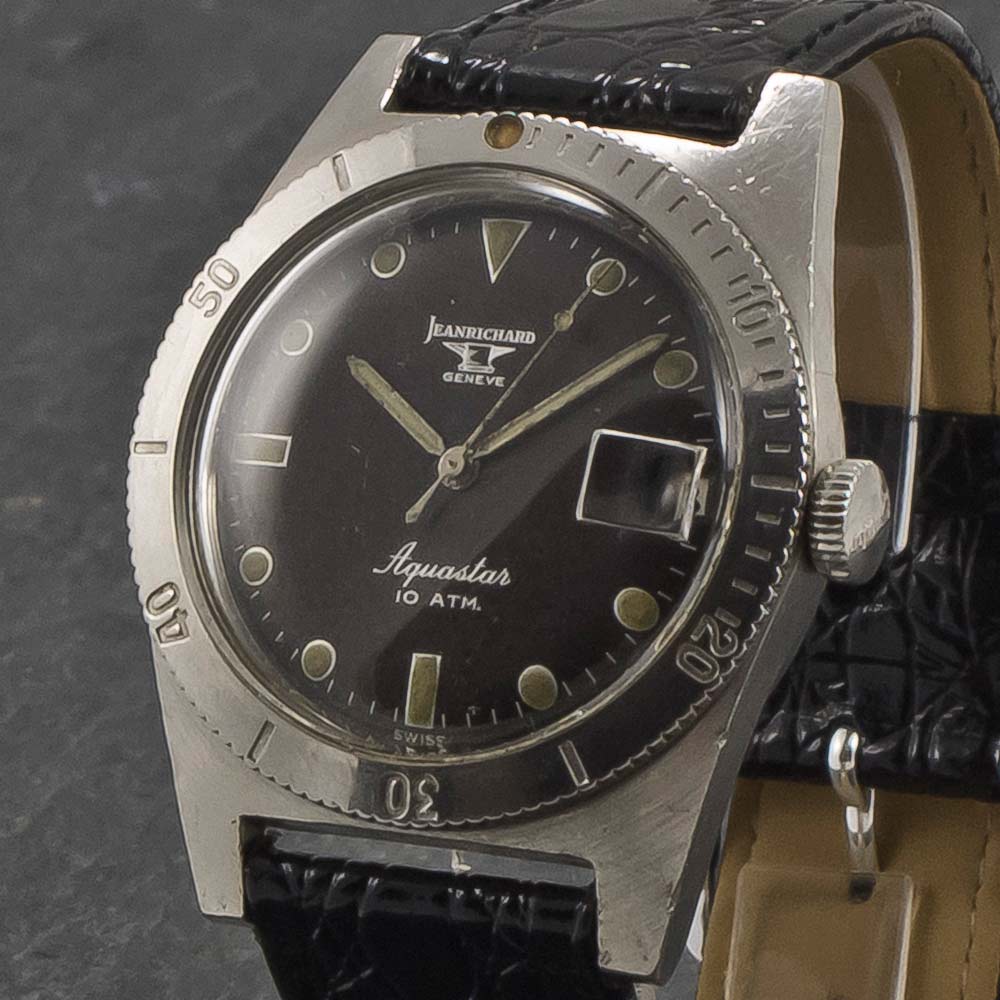 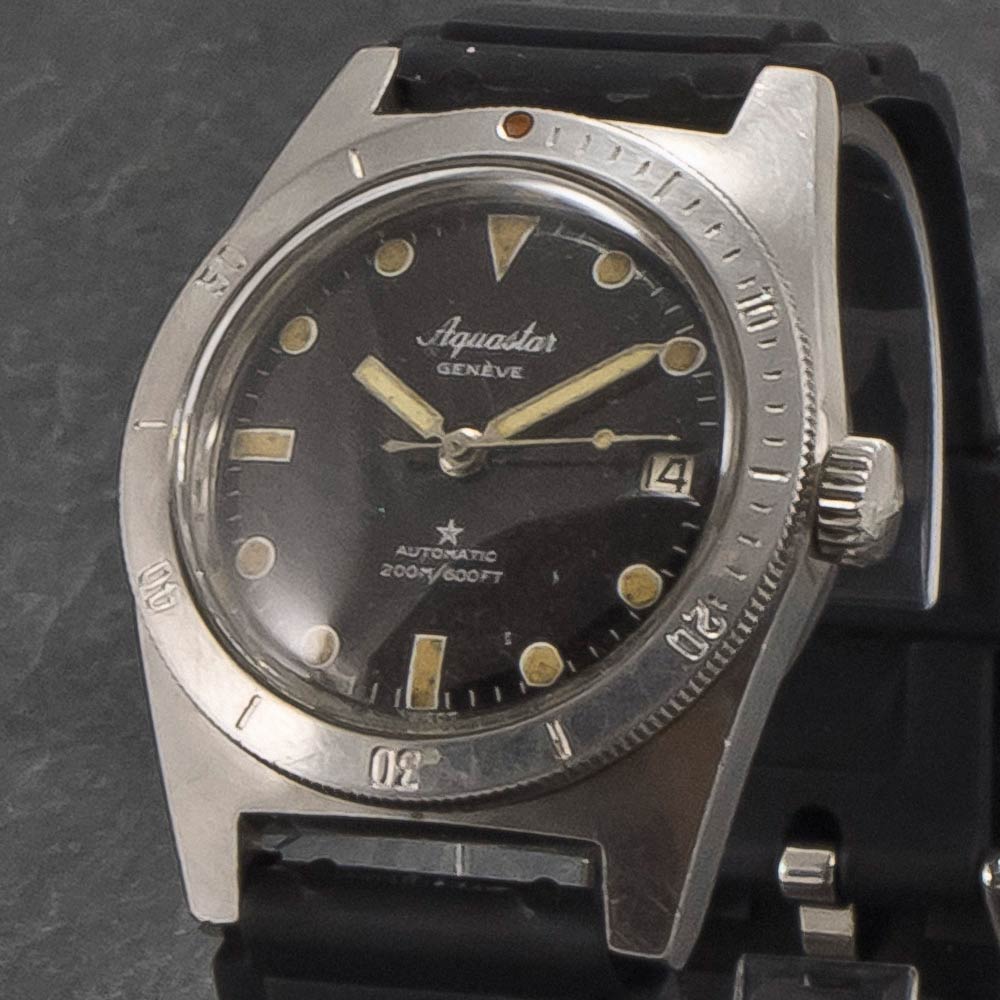 The Aquastar 60 produced after the year 1962 isn’t in any way a collector’s item nor comparable to the original JeanRichard Geneve Aquastar 60. Event though AquaStar till this day is known for making very good and waterproof watches their collections is now-a-days not targeted to divers but primarily sailors to whom AquaStar has become an important manufacturer.