A Vintage Watch – A good invenstment

– An industry ripe for a shake-up 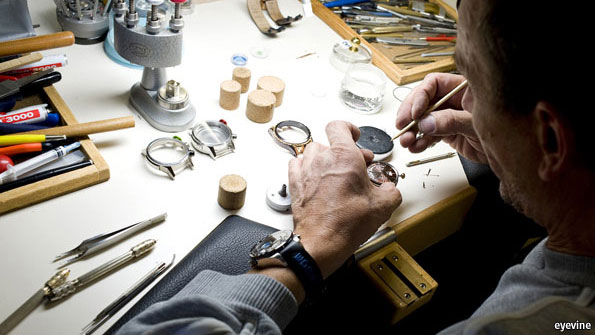 The average Swiss watch costs $685. A Chinese one costs around $2 and tells the time just as well (see chart). So how on earth, a Martian might ask, can the Swiss watch industry survive? Yet it does. Exports of watches made in Switzerland have grown by 32% by value over the past two years, to SFr21.4 billion ($23.3 billion). Demand in the biggest markets (China, America and Singapore) dipped recently, but some of the slack was picked up by watch-loving Arabs and Europeans. 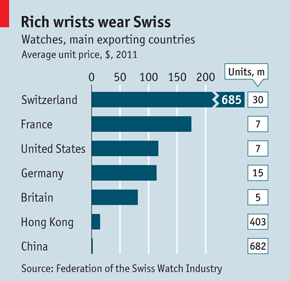 No one buys a Swiss watch to find out what time it is. The allure is intangible: precise engineering, beautifully displayed. The art of fine watchmaking has all but died out elsewhere, but it thrives in Switzerland. “Swiss-made” has become one of the world’s most valuable brands.

Made in Swiss – what’s all the fuzz about?

In the popular imagination, Swiss watches are made by craftsmen at tiny firms nestled in Alpine villages. In fact, the industry is dominated by one big firm. The Swatch Group’s stable of brands (Breguet, Blancpain, Omega and a dozen others) generated watch and jewellery sales of SFr7.3 billion in 2012. That is up by 15.6% over the previous year and accounts for one-third of all sales of Swiss watches. In January Swatch announced the purchase of Harry Winston, an American jeweller which also makes watches in Geneva.

Swatch’s dominance goes even deeper than this. It is the biggest supplier of the bits that make Swiss watches tick. It owns ETA, which makes over 70% of the movements (core mechanisms) put in watches by other Swiss watchmakers. Another subsidiary, Nivarox-FAR, supplies more than 90% of the balance springs (which regulate watches).

Many big brands rely on Swatch. LVMH (owner of Bulgari, Hublot and TAG Heuer) and Richemont (owner of IWC, Piaget and Vacheron Constantin) use Swatch components. So do the British and German watchmakers that are trying to break into this lucrative market. Few, however, can match the precision of a Nivarox balance spring.

Swatch became the watchmaker to watch in the 1980s, when it merged two weak companies and launched Swatch watches as a relatively cheap brand (though not nearly as cheap as a typical Chinese timepiece). It remains dominant, in part, because other firms find it easier to let someone else go to all the trouble and expense of producing their watches’ most fiddly and essential components.

But Swatch now finds this arrangement irksome. It supplies parts to rivals (Swiss and foreign) which then spend lavishly on advertising. Swatch would like to curb its sales of components, to 30% of the Swiss total by 2018. The Swiss Competition Commission agreed to modest reductions in 2012. After lobbying by watchmakers, Swatch will make no more cuts this year, but next year it will probably try again.

Swatch may be doing the industry a favour. Its actions may prod other watchmakers to invest more in their own factories. Already, Richemont and LVMH are buying up smaller component-makers. “Everyone could actually produce these components,” says a spokesman for the Competition Commission.

At present only a few high-end watchmakers can do without Swatch: for example, Patek Philippe in Switzerland and Robert Loomes in Britain. But such Swatch-shunners typically make only a few (costly) watches each year. Firms that make larger batches of not-quite-so-pricey watches still need Swatch. So its retreat from the parts market will cause turmoil, and probably more consolidation.

Meanwhile the Swiss government seems about to tighten the definition of “Swiss-made”. Currently, a watch may not claim to be Swiss unless 50% of its components, by value, were crafted in the cantons. Swiss watchmakers are trying to get the threshold raised to 60%. That will create demand for Swiss components even as Swatch curbs the supply. So watch out: prices will rise even higher.